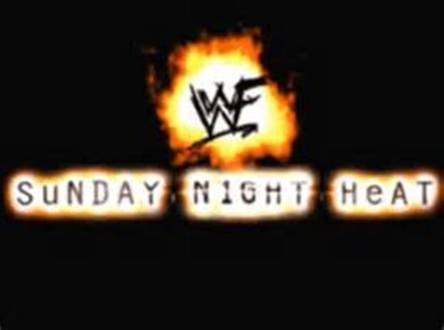 VINCE’S LATEST MASTER PLAN: we get clips of the announcement that Steve Austin will be defending the WWF title at In Your House: Breakdown on September 27 in a triple-threat match against Kane and the Undertaker. Why didn’t he think of this sooner?

IT’S GETTING HOT IN HERRE! Your hosts are Jim Ross and Shane McMahon.

No entrance for poor Vader. JR puts over how “red hot” Shamrock is right now. He won the Lion’s Den match against Owen Hart and he’s the King of the Ring. He also recalls that the only other time Shamrock and Vader squared off, Vader left the ring with a broken nose, so expect FIREWORKS tonight. Also, JR says Vader is fat. Shamrock uses his speed to take down Vader for a ground and pound and the cross armbreaker, but Vader blocks and grabs the ropes. The Body Attack puts down Shamrock leaving him to get splashed not once but TWICE for 1-2-NO! From there, Vader hits a Flying Body Attack for another nearfall. Vader forces Shamrock down into a Fujiwara armbar, but Shamrock rolls out. Shamrock avoids an avalanche and starts coming off the ropes into Vader. As Vader gets staggered, he walks into a powerslam for two. Looks like it’s Knuckle Up Time, but Vader counters the hurracanrana with a Powerbomb. He tries another Flying Body Attack, but he flies down into an armbar and then into the ANKLELOCK for the tapout. (4:15) I recommend their In Your House: Cold Day in Hell match though – if you can find it on the Peacock thing. After JR and Shane continue to put over Shamrock, he makes a challenge to Steve Austin for another shot at the WWF title. ¾*

We get clips from Sable on the set of the USA Network TV show “Pacific Blue” (or PaCIFIC BLuE if you’re cool!). We see her taking bumps and whatnot, but then she decides to challenge Jacqueline to an “evening gown” match, which is a “tuxedo match” for the womenfolk.

Nice segue to the Val Venis TitanTron after Sable talking about stripping Jackie. Hilarious. Val tells the people to forget about Mark McGwire and Sammy Sosa because he has the “most dangerous bat” in the business. In case you’re too young or just not a baseball fan, McGwire had broken the single-season home run record in between this taping and the time HeAT aired, which was September 8. NEVER FORGET. Ross says if Jackie accepts Sable’s challenge, it will happen LIVE tomorrow night on RAW. Dustin Runnels is in the crowd holding his sign about *his* return. Venis dominates and we get a quick DQ as Jackie leaps off the top onto Val’s back. (0:51) Shane calls that match a “quickie”. Oh boy. In the aisle, Michael Cole asks Jacqueline if she accepts Sable’s challenge. Jackie is down with it. Mero guarantees Jackie will rip off all of Sable’s clothes. Well that’s that, but the real important matter comes when Dustin Runnels jumps Val Venis in the ring and does a number punishing him with his belt. Some of the zebra shirt boys do their best to get Runnels off him. ¼*

Anybody got any of the WWF Bone Crushin’ Buddies (brought to you by Jakks!)? 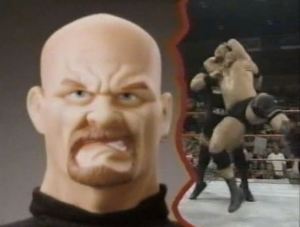 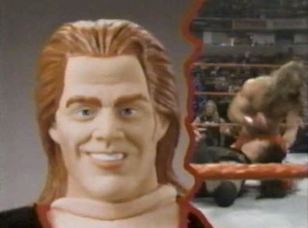 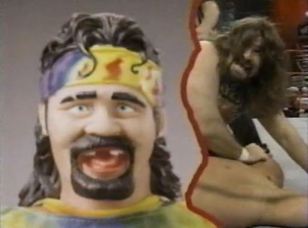 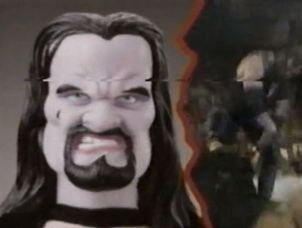 TAKA decides to BUM RUSH THE SHOW here, but it doesn’t quite work out for him. Looks like Gangrel and Edge will go one-on-one tomorrow night on RAW. Yamaguchi-san tries to distract Gangrel, but TAKA hits Gangrel with a baseball slide to set up the Asai Moonsault. Back in, Gangrel doesn’t really sell what TAKA is throwing at him and delivers a release tiger suplex. A bridging Northern Lights suplex gets two. A vertical suplex and an elbow drop gets another two-count. Ross and McMahon discuss that TAKA hasn’t really defended the WWF Light Heavyweight title lately on TV. Gangrel seems to be working by the hour here. That allows TAKA to come back with a spinning heel kick and a missile dropkick. He looks for the Michinoku Driver, but Gangrel counters to the IMPALER DDT for the win. (3:51) The Light Heavyweight title hasn’t been defended in MONTHS on TV and will continue to not get seriously defended until Christian shows up. *

Jeff Jarrett is pissed off that X-Pac screwed with his boots and his hair, so now he’s going to screw with him in a lumberjack match. Bring DX and Jarrett will bring Southern Justice with him. How many lumberjack matches in the modern era (say last ten years, 1989-1998) have you seen in the WWF? Not a very common WWF gimmick match, but probably more than I’m thinking it is.

D’Lo has a big challenge here. Kane stalks D’Lo to start and D’Lo does all he can to not let Kane put his hands on him. He slugs D’Lo once and D’Lo bails, but he’s in Taker’s yard now. Mark Henry tries to convince his buddy to get back in the ring. Back in, Kane runs D’Lo into the buckle here, there, and everywhere. Kane slams D’Lo, but misses an elbow drop coming off the ropes. Kane sits up and eats a low dropkick. Kane sits up again and NO-SELLS a clothesline. D’Lo heads up to the middle rope, but gets goozled. Kane clotheslines D’Lo and boots him down. Out to the floor, Henry decides to get up in Kane’s face. Taker comes over and starts punching away on Henry for his troubles. He then whips Henry into D’Lo, who then falls into the steps. Meanwhile, the Rock shows up and wallops Kane in the back with a chair. The ref is too busy watching what’s happening on the floor to notice. There’s some payback from RAW Saturday Night. Now the Undertaker chases after the Rock. Once the Rock has returned to the locker room, Taker goes back to the ring to help his brother Kane who is being double-teamed by Henry and D’Lo. (4:07) No bell, but Kane wins via DQ. Kane takes out D’Lo with a Chokeslam, but it takes both Taker and Kane to Chokeslam Henry. Now D’Lo gets the SPIKE TOMBSTONE to really put the nail in the coffin. Shane refers to Taker and Kane as the “Demonic Duo”. *

Lumberjacks include: Billy Gunn, Road Dogg, Mark Canterbury, Dennis Knight, Skull, 8-Ball, Headbanger Mosh, Headbanger Thrasher, Droz, Bradshaw, Brian Christopher, and Scott Taylor. Shane is so CRINGE sometimes. If you’re watching along, just listen to him. Both guys take turns getting tossed out to the sides they don’t want to be on to put over the lumberjack match concept. X-Pac misses a corner charge to do the Bobby Eaton bump. Jarrett hits an armbreaker DDT and tries to keep X-Pac down. He whips X-Pac HARD into a corner and then throws X-Pac to the wolves. Back in, Jarrett hits a stalling vertical suplex for two. Jarrett misses a corner charge himself, but comes back with a desperate back suplex. BOTH MEN ARE DOWN! Commercials. When we return, X-Pac wipes out Jarrett with spin kicks. There’s the Bronco Buster. The Outlaws get involved and make a wish on Jarrett, but then Southern Justice pulls the top rope down causing X-Pac to fall out to the floor. They go to KABONG him, but Road Dogg saves the day and KABONGS Knight. That triggers a brawl among the lumberjacks. Meanwhile, X-Pac hits Jarrett with the X-FACTOR. Canterbury sneaks in and hits the Pumphandle Powerslam. Jarrett rolls over on top of X-Pac and gets the win. (5:37) Fun little main event to keep the fire going among Southern Justice, Jeff Jarrett, and DX. **

Here comes Stone Cold Steve Austin to the ring to respond to Ken Shamrock’s challenge. RIDICULOUS pop for Austin as always. First, Stone Cold reminds us all how he respects the Undertaker for keeping it one-on-one at SummerSlam. Vince is trying to say he’s sucking up to Taker, but that would never happen. As for the triple-threat match goes, Austin will not give Vince the satisfaction of letting anybody take his WWF title. He switches gears to Ken Shamrock. He respects what Shamrock did in the UFC, but this is the WWF. If Shamrock wants a WWF title shot, Austin tells him to bring his little blue tights out here and take his ass whooping. Well, Shamrock comes out because he’s not a punk, but the referees get in between Shamrock and Austin. Vince and his stooges head out. Austin orders Vince to ring the bell so he and Shamrock can have their match, but WE’RE OUTTA TIME!

Next up, RAW IS LIVE AGAIN! Until next time, so long for now.