IT’S GETTING HOT IN HERRE! Your hosts are Jim Cornette (not Ross) and Shane McMahon. Both Jim Ross and Jerry Lawler are out working on the “Man on the Moon” film.

Apparently Mankind has some back-up creating an allegiance between these three guys. Runnels is wearing all black this week. He won’t punch Mankind, so basically Mankind can have his way with him. Backstage, we see Mr. McMahon with his new business associates: the Undertaker and Kane. Back to the match, Runnels all of a sudden doesn’t mind punching until he realizes he’s punching Mankind. He gets mad at himself, allowing Mankind to land the Double-Arm DDT and the MANDIBLE CLAW gets the three-count. (2:38) No Taker and/or Kane, so the Rock and Ken Shamrock have done their duty. ¼*

While Dustin Runnels is praying in the ring, Val Venis decides to come out and make some sexual double-entendres. He shows a new flick starring Terri Runnels called “How Terri Got Her Groove”. She and Val are back in bed. Terri seems to love how “rock hard” the Big Valbowski. Cornette announces Val Venis will meet Dustin Runnels one week away at Breakdown: In Your House.

Elsewhere, Michael Cole speaks with the Undertaker and Kane. He wants to know about their business deal with Mr. McMahon. The question just angers the Undertaker. The business deal is strictly business. Taker has no love lost for McMahon. If Vince was on fire, Taker wouldn’t throw water on him. As for Steve Austin, it’s not his or Kane’s fault Austin has angered McMahon. What Austin needs to concern himself with is the WWF title. Keep your mind focused so the only thing he loses is the WWF title. Cole thinks the plan seems to be flawed because now Mankind, Ken Shamrock, and the Rock are involved. Taker tells those three if they get in his or Kane’s way, they will get hurt. Think long and hard before you stick their noses in their business, because the Undertaker and Kane don’t take prisoners. As for the Disciples of Apocalypse, Taker says they won’t be the first victims but will be the next victims. Kane grabs his throat piece to say that he and Taker’s destiny is Austin’s demise. Next thing we know, Mankind, Ken Shamrock, and the Rock show up for a WILD backstage brawl. Mr. McMahon tries to help break things up with the agents and referees, but Shamrock throws him up against some lockers. Taker and Kane are armed with sledgehammers as the fight calms down.

After the break, Mr. McMahon chastises Mankind for what just went down. Mankind is apologetic, but McMahon knows what happened at SummerSlam. Vince seems understanding about the whole thing, but reminds Mankind there’s a plan in place here. He makes sure Mankind got the “Get Well Soon” card from Vince’s secretary. Wow, so sincere! People are going to get hurt if Mankind doesn’t stop interfering in the master plan. McMahon convinces Mankind to take the Rock and Ken Shamrock and leave the arena so nobody else gets hurt. Mankind says he’ll need a ride though since he doesn’t drive. Good stuff.

Nothing like seeing Cornette pretending to enjoy ICP’s music and “dancing” at ringside with Shane. Jackie BUM RUSHES THE SHOW to start. She runs into a boot in the corner and takes a hair whip slam. The LUNA BOMB gets two. She then misses a corner charge to do the Bobby Eaton bump. Jacqueline now goes for the leg and applies the FIGURE-FOUR for the win. (2:21) Tomorrow night on RAW, Jacqueline and Sable will meet in a “wrestling” match. Can you believe it? A “wrestling” match on a “wrestling” show. Huh.

Pat Patterson and Gerald Brisco along with Sacramento’s Finest make sure Mankind, the Rock, and Ken Shamrock leave the property.

DX and Shane crack on Cornette for being “out of touch”. Road Dogg is still selling the throat injury Jarrett gave him last week on RAW. Billy Gunn tries to do the Road Dogg shtick, but has a little trouble. Oh forget it – DX has two words for ya. D’Lo and Gunn start the match. They trade wristlocks, but D’Lo goes to the eyes and catch Gunn with a back elbow. Gunn comes back with a press slam and the FAMOUSER. Well, it’s not his finish yet, but it will be. Tag to X-Pac, D’Lo sees him coming and cleans his clock. Owen tags in, he and X-Pac run the ropes, and Owen takes a big hiptoss. In comes Triple H. Some technical difficulties happening during this match. High Knee by Triple H gets two. Jarrett tries to bury a knee from the apron, but Triple H NO-SELLS and knocks him to the floor. Owen then grabs Triple H for a DDT. Jarrett tags in and puts the boots to Triple H in the corner. More technical difficulties. Jarrett lands a nasty swinging neckbreaker and tags in D’Lo. He hits that head bopping leg drop. Brown draws in Gunn so he and Owen can make a wish on Triple H. Owen lands an atomic drop and a clothesline for two. More technical difficulties. Triple H gets triple-teamed on the wrong side of town. D’Lo talks smack, to which Triple H gets a desperation Facebuster. Hot tag to X-Pac, he’s all spinning kicks. Floatover suplex gets two. Now the match breaks down. As everybody clears out, X-Pac hits the Bronco Buster on Jarrett. While all the craziness is happening, Mark Canterbury gets in the ring and gives X-Pac the Meltdown. After Canterbury clears out, D’Lo hits the LO DOWN for the three-count. (5:55) Afterwards, we see MARK HENRY show up and leg drop Triple H in the aisle. **

After the break, we see it’s that dang Al Snow who is the one responsible for all the technical snafus during the last match. Kerwin Silfies is backstage demanding Al Snow be removed from the trailer.

Edge flies through TAKA and wins with the DOWNWARD SPIRAL in :32. The rest of Kaientai come out to pounce on Edge, but Gangrel comes out for the save. Once Kaientai clears out, Gangrel tells Edge that he will come home. Edge looks confused. N/R

Back in the production trailer, Al Snow is being handcuffed and escorted out.

After the break, Commissioner Slaughter has security escort the handcuffed Al Snow to the ring so he can call him “slime” and “moron”. Snow has Head behind his back. He starts laughing because Head sneezed up his butt. Since Slaughter is tired of this guy, he makes a “Boot Camp” match for RAW. If Snow wins, he gets reinstated in the WWF. As Snow turns away, Slaughter jumps him and applies a semblance of the Cobra Clutch until the barricade security dude gets Slaughter to stop. Snow gets escorted backstage looking defeated.

Elsewhere, Paul Ellering talks with this DOA boys. I’m guessing he’s giving them the bad news they are doing the J-O-B tonight.

The DOA don’t even really get an entrance so we don’t get to see those beautiful Titan bikes. Vince walks behind the Undertaker and Kane while watching his back to make sure there’s no Mankind, the Rock, or Ken Shamrock. Mr. McMahon grabs a third headset and joins his son Shane and Jim Cornette for commentary. Corny makes sure Vince doesn’t need a drink or anything, doing the weaselly manager/heel commentator bit. Skull and 8-Ball BUM RUSH THE SHOW because why wouldn’t you. Kane gets knocked out, leaving DOA to double boot Taker for a two-count. Kane saves the day. Taker pounds 8-Ball or Skull and levels him with the Jumping Clothesline. Tag to Kane, the beatings continue. Crowd wants “Austin” for sure. Kane NO-SELLS what the DOA guy is throwing at him. There’s a Side Slam to set up the Flying Clothesline. When the camera looks at the table, I’m pretty sure Vince had an orgasm. Corny asks Vince where he’s going to be at during the triple-threat match at Breakdown: In Your House. He’ll be at ringside with a smile on his face. Cornette actually throws out the thought to Vince that the “master plan” may not work and then he’ll really be in hot water. Kane CHOKESLAMS 8-Ball (according to Shane) for a two-count. The match breaks down. 8-Ball gives Kane a piledriver, but Kane SITS UP and shows 8-Ball how it’s done with a TOMBSTONE for the three-count. (4:02) Vince calls that a prelude to what will happen to Steve Austin at Breakdown: In Your House. There will be a *new* WWF champion and Vince GUARANTEES it. That’s all she wrote. Corny is ecstatic about coming back for RAW with Shane. ¾*

Coming up, we have the go home RAW for Breakdown: In Your House.

Little side rant: compare last week’s WCW Thunder to this episode of WWF Sunday Night Heat. Think about how scattered and apathetic the WCW product is right now against the focus of the WWF product. Now, the WWF isn’t perfect by any means, but this B-show is FOCUSED and you could not even begin to consider the argument that WCW Thunder is a better partner for WCW Monday Nitro than Heat is for RAW. There’s no way. 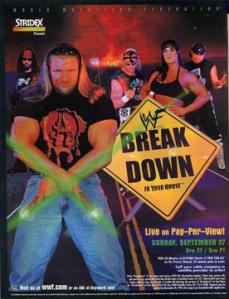 The World Wrestling Federation and Stridex presents “Breakdown: In Your House”
LIVE on September 27 from the Copps Coliseum in Hamilton, Ontario, Canada
ONLY ON PAY-PER-VIEW