Your hosts are Jim Ross and Jerry Lawler. I will say, unlike in WCW, there’s not a ton of thought put into the PPV sets in 1998 outside of the now “Big Five”. Every WCW PPV set in 1998 looks like there was at least some artistic thought put into them. END_OF_DOCUMENT_TOKEN_TO_BE_REPLACED 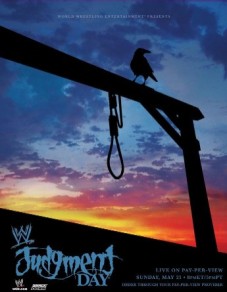 Your hosts are Michael Cole and Tazz.
END_OF_DOCUMENT_TOKEN_TO_BE_REPLACED

Here we are now into another stretch of bang, bang, bang shows only three weeks apart. I’m not really that excited going into this one as although it looks on paper to be a solid show, there’s also nothing that really stands out. I’m expecting the most out of Jericho/Mysterio since they’ve done good stuff together in the past, and Jericho will do all he can to make the story meaningful. Benjamin/Morrison also looks like a potential show stealer, but the rest looks more like “Been there, done that”. So let’s see what we get out of Judgment Day 2009. END_OF_DOCUMENT_TOKEN_TO_BE_REPLACED