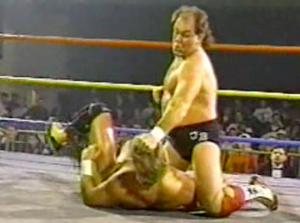 Don’t know if it’s just my copy, but we’re thrust right into in-ring action in the ECW Arena. Yay!

Pitbull 1 treats Chad like an 80’s jobber for the first several minutes. Tag in for a Pitbull double suplex. Pitbull 2 press slams Chad and clotheslines Joel. Pitbull 1 perches Joel up top and kicks him down to the floor, where he punishes him with a metal pole. Pitbull 2 back in for a double clothesline. Tag back to Pitbull 1 who slingshots in for a flying shoulderblock. Superbomb, 1-2-3 (4:38) Squash. *1/2

Recap time. Terry Funk appeared out of a box and joined forces with Sandman to destroy Cactus Jack until Shane Douglas made the save.

Funk and Sandman have a quick promo.

Shane Douglas interviews a bandaged up Cactus Jack. Funny how Jack is screaming yet Shane thinks he needs to be three inches away to hear him.

Rewind all the way to 93, when Shane Douglas turned on Tommy Dreamer in a tag match. Dreamer cuts a promo and apparently he’s still a little irked by it. Getting an up-close look at Dreamer’s goatie, you wonder how he ever, ever got over. He also has words for Terry Funk and Raven.

This match from Double Tables was a month old by the time this episode aired. Tully fires away to start and scores the Slingshot Suplex for two. Piledriver gets two. Shane fights back but charges into Tully’s knee. Back and forth a bit, and Tully comes off the top with an elbow smash. Shane fights back again and clotheslines Tully to the floor, but he looks like he got the worst of it. Back in, Tully sneaks a back suplex, but Shane lands on top for 1-2-NO! To the floor, Tully snaps Shane’s neck on the guardrail. Shane takes a beating and a collision with the ring post. A policeman chuckles as he strolls around ringside. Nice touch. Tully wants to suplex Shane back into the ring, but Shane falls on top for 1-2-3 and retains the title. (8:04) Decent intensity and effort, but it has that going-nowhere vibe and a weak ending. *1/2

Oh dear, make yourself another drink, guys … it’s a Public Enemy promo from some empty lot somewhere, presumably in the ghetto. Obviously I’m watching this through a 2015 lens, but I just do not understand how anyone thought this was good on any level back then.

Back at the Arena, P.E. shows up to chat with Joey Styles. Rocco is in a wheelchair after the beating he took from Dean Malenko and Chris Benoit a few weeks ago. Brawl ensues and Grunge is taken out quickly. Malenko pushes Rocco and his wheelchair down the aisle and Benoit clotheslines Rocco off the damn thing! Then he puts Rocco back in the chair and runs him HARD into the rail. The melee continues, but that’s all we get before the show’s over.

Nothing special in the ring and an awful lot of talking in this episode, but at least the angles are moving forward here. So it’s a small step up from the last few.