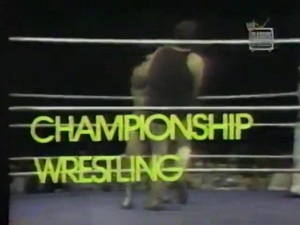 Pop Culture #1s:
#1 Movie of the Week: The Car starring James Brolin
#1 Song of the Week: When I Need You by Leo Sayer
#1 TV Show of 76-77 Season: Happy Days starring Ron Howard and Henry Winkler

We pick up with the Bruno-Graham match from the Baltimore Civic Center where we left off last week. They are shown battling in a test of strength. Bruno goes down to his knees a few times and finally onto the mat where Graham gets a few nearfalls. Sammartino eventually fights his way up and forces Graham down to the mat – only this time Graham ends up in the ropes. All in all, around two and a half more minutes of action. We’ll pick up next week with the finish.

Yes, it’s *that* Frankie Williams from the first Piper’s Pit. He doesn’t really seem to know what to think of George Steele to start. It’s almost like he has no game plan. Vince calls Steele one of the ugliest and hairiest people he’s ever seen. How rude! Steele softens up the arm for his Flying Hammerlock. He bites Frankie’s arm quite a bit – to the point that Frankie actually BLEEDS. At that point, Steele lifts him up for the FLYING HAMMERLOCK and gets the win at 4:12. George keeps chewing on Frankie’s tricep way after the bell. Vince says Steele is completely out to lunch. Hilarious.

Both Estrada and Sousa are in the ring at the same time here. Putski hiptosses them both around until they hit the floor and regroup. Back in, they each grab an arm only to be yanked into one another. Try again, fellas. They get behind Putski and grab his trapezius muscles, but Putski easily elbows them away. Sousa misses a swing and gets slammed down. As Sousa begs away in the corner, Estrada attacks Putski from behind only to receive a headbutt. Sousa gets the same treatment. Estrada then gets dumped out as Putski whips Sousa from corner to corner followed by a powerslam. Putski delivers the POLISH HAMMER to Sousa and then slams Estrada on top of him to pin them at the same time at 3:45.

Here’s that special women’s match Vince mentioned last week. They are both clearly influenced by the Fabulous Moolah with the way they conduct themselves. Just two tough old broads here. Vince brings up the Fabulous Moolah and refers to her as still the women’s champion. Kitty does this thing where she applies a front headlock and reaches around with her other hand to pull on Sheridan’s hair. Sheridan comes “alive” and small packages Kitty for the win in 3:05.

We get another look at the new WWWF heavyweight champ. Graham doesn’t say anything and poses those huge muscles while the Grand Wizard covers him with baby oil. Vince points out that Graham has already destroyed Ted Adams just by keeping him at bay. Wizard even gives Graham’s hair a good combing. Graham completely overpowers this ham and egger with roughhouse moves. The BEARHUG submits Adams in 6:15. Three minutes of that match was rubbing oil on the Superstar. Capetta is really having trouble with that microphone tonight, too.

Scicluna gets awfully upset at the crowd reaction for Maivia. Vince says he wants to get the story behind Maivia’s tattoos. A chop to the head of Maivia doesn’t seem to work, so he reaches into his tights for a foreign object. That doesn’t even seem to work. Maivia headbutts Scicluna down and sits up in the corner. There’s a wristlock, but Maivia rolls through. Scicluna has no game plan for this guy. Well, okay. He jabs Maivia again in the throat with his foreign object and this time Maivia goes down. As Scicluna kicks at Maivia, Maivia starts to NO-SELL and punches away on Scicluna. Maivia makes one final comeback with a couple running shoulder tackles and a crossbody block takes down Scicluna for the three-count at 7:21. Scicluna being able to work off Maivia’s charisma made this one work and pretty entertaining.

Jones grabs a headlock, but gets pushed off into the ropes for a knee to the gut. Patera throws Jones to the floor and *that* pisses off Special Delivery. He gets a little fired up, but Patera slows down the match and hammers Jones down again. Jones comes out of a chinlock and sunset flips Patera for two. Patera comes off the ropes for a crossbody. It looked like Jones would catch him for a slam, but his body gives way and Patera lands on top of Jones for two. Patera hits a pair of elbow drops and that’s all she wrote at 5:13. It seems like they have a good 10-15 minute match in them, but maybe that’s just me.

They cut out before Vince can tell us what we’ll see next week. It shouldn’t surprise you that it’s more of the same people we’ve been seeing, but next week should be interesting because we will have a six-man tag main event involving the WWWF tag champs!