This is a noteworthy episode of Thunder if for no other reason than that Ric Flair was scheduled to appear to make a huge announcement regarding his career and he NO-SHOWED the taping to go watch his son Reid wrestle. This was announced on Monday Nitro and taped on Thursday, so I don’t know how much of a “last minute decision” this was. Flair was quickly suspended and eventually sued for breach of contract.

My copy of this episode of Thunder has the Saturn versus Tokyo Magnum match cut out and goes right into the promo to hype this week’s one hour edition of WCW Saturday Night.

WCW Saturday Night! Watch it – IF YOU WILL! 6:05PM eastern time on TBS! Chris Benoit will be in action! TV champ Booker T takes on Fit Finley! Curt Hennig battles Jim Neidhart in the feature bout! It’s the MUTHASHIP! Take it to the PAY WINDAH, baby!

Mike Tenay subs for Lee Marshall during this match. Poor Nagata is just here to put over Iaukea since he’s got a title match with Chris Jericho on PPV coming up. Match is pretty bad with lots of flubs. It’s always strange seeing someone much more talented putting over someone much more green. Sonny Oono interferes and gets hit with a double sledge from the top to the floor. Back in, Nagata gives Iaukea a dragon screw leg whip. Iaukea kicks away the Nagata Lock and delivers the NORTHERN LIGHTS SUPLEX for the win. (5:23) Chris Jericho appears and tells Iaukea he’s too fat to be a cruiserweight. Later on in the show, Jericho will prove it to the world with a scale. ½*

They take us back to the February 2 edition of Thunder to show a conversation between Raven and Mortis. If Mortis wants to join the Flock, he needs to be true to himself. He also had to beat DDP on that edition of Thunder, but of course he did not. After Mortis lost, Raven gave Mortis the EVENFLOW DDT on the ramp.

WHOSE SIDE IS KEVIN NASH ON? They re-air a snippet of the promo he cut before the main event on Nitro. Nash makes a reference to Syxx and shows whose side he’s on with the Randy Savage t-shirt he’s wearing.

Next up, Raven appears in the ring with the stolen U.S. title belt. He starts to cut a promo when an overzealous fan jumps the rail and pulls Raven out of the ring by his hair! The fan actually looked like the Sandman to me. Arena security pounces on the guy and Raven gets back in the ring to cut the promo, but now his mic won’t work. He continues to cut the promo anyways while the crowd does the Florida State Seminoles war chant. When the mic comes back on, he talks about kicking out of the Diamond Cutter and ending DDP with the Evenflow DDT. Quoth the Raven, nevermore.

Tony Schiavone (because Gene doesn’t work on Thursdays) brings out Buff Bagwell for an interview. Next week on Nitro, Buff will be facing Lex Luger. Buff says when he was throwing Luger around a few months ago, nobody gave him the respect he deserved. He’s 5-1 against Luger! Once again, he’ll show us all who the REAL total package is. Come Monday, Luger will learn that he’s buff and he’s the stuff.

Benoit spends much of the match to start fighting off both Konnan and Vincent. Konnan avoids the Crippler Crossface and nails Benoit with a DDT. Tony announces that the TV title match between Booker T and Chris Benoit at Spring Stampede will have no time limit. Next thing you know, Benoit has Konnan caught in the CRIPPLER CROSSFACE for the win at 3:19. *

Rick Rude kicks Mike Tenay out of his seat hole because he’s the only one who can call a Curt Hennig match. I don’t suspect this will go well for Duggan. However, Hennig underestimates Duggan and Rude returns to the ring when Duggan gets hot. He slams Hennig and hits the THREE POINT STANCE. Rick Rude hops up on the apron holding a pair of handcuffs. He cuffs Duggan to the top rope and the ref calls for the bell in 1:43. They beat the crap out of Duggan until Davey Boy Smith and Jim Neidhart save the day. On their way to the back, Rude chucks the handcuff keys into the stands. Heenan has a good laugh about it. ¼*

Another match I don’t think will bode well for Glacier. Buff watches the match from the ramp. Glacier delivers a few kicks, but Lex fires back with clotheslines and the TORTURE RACK for the win at 2:20. Buff says if Lex has *that* much trouble with Glacier, what is going to do with Buff?

Mike Tenay returns. Psychosis gets Kidman on the floor and creams him with a tope suicida. Back inside, that gets two. Kidman stuns Psychosis with the BK Bomb. The tornado bulldog on Psychosis gets two as well. While Psychosis fights off a superplex and decks Kidman with a flying spinning heel kick, Chris Jericho comes out to the ring carrying a scale talking to ref Mark Curtis. Psychosis has Kidman pinned TWICE while this conversation is happening. A reverse suplex connects on Kidman. Psychosis goes up top for the Guillotine Legdrop, but La Parka appears and cracks a chair over Psychosis. Kidman heads up top and delivers the SEVEN YEAR ITCH to the back for the win. (3:38) Chris Jericho hangs around to talk to Tony Schiavone holding that scale in his hands. **

Chris Jericho says he will prove that Prince Iaukea weighs four more than 225, which is the weight limit for the cruiserweight division. Tony points out that the WCW championship committee would not consider this an official weigh-in or anything. Jericho says he got JJ Dillon’s permission to do this. Haha. Prince Iaukea comes out and steps on the scale. Tony tells us that Iaukea weighs 218. Jericho picks up the scale and hits Iaukea over the head. This feud did need something to turn up the heat and this was a pretty good idea. Jericho slaps on the LIONTAMER to add insult to injury. COME ON FATTY! COME ON FAT BOY! Awesome.

Buff brings out the trophy introduced on Monday Nitro again. There’s still no explanation on what the trophy is supposed to represent. Looks like a squash match for about ninety seconds, but then Disco has a flurry of offense including a swinging neckbreaker for only one. Disco flies into a Belly to Belly Suplex. A butterfly slam connects to set up the STEINER RECLINER for the win at 3:37. Afterwards, Buff dumps out Disco so that Steiner can pose in front of his trophy.

We take a look at the first movie to knock “Titanic” out of the number one spot at the box office since it was released. It’s “Lost in Space” starring William Hurt, Gary Oldman, and Matt LeBlanc? Why are they taking TV time to advertise this movie, you ask? Well, the move was released through New Line Cinema which is owned by Time Warner, of course.

WILL JERICHO HOLD ONTO TWO BELTS AFTER TONIGHT? Strong tie-ups to start. Jericho escapes a headlock and tries a hiptoss, but Booker blocks and drills him with a clothesline. Booker hits the Hook Kick while Schiavone and Tenay discuss whether or not Ric Flair will be here tonight. Jericho takes a clothesline out to the floor and gets brought back to the ring by Booker. He begs off and goes to the eyes. Booker gets grabbed and driven onto the top rope for a hotshot. Jericho drops Booker on the top rope and delivers the springboard dropkick. A suplex and C’MON BABY gets two. Lionsault misses and Jericho charges into a sidewalk slam. Here comes the Axe Kick. Flapjack, SPINAROONIE, and the Harlem Side Kick connects. Boy, this crowd is HOT for Booker. Jericho yanks ref Mickey Jay into the MISSILE DROPKICK and when the ref gets his wits about himself, he calls for the bell to DQ Jericho. (5:06) No doubt the match of the evening. **½

Tony Schiavone tells the audience that Ric Flair will not be here tonight even though he was supposed to make a big announcement. Of all people, Eric Bischoff and Scott Steiner interrupt the segment. Bischoff tells Tony that everybody knows when he’s lying. He makes fun of Flair and says Ric looks in the mirror everyday and wonders why he couldn’t be the greatest of all time like Hollywood Hogan. He somehow segues this into showing everybody the trailer to Hogan’s new movie: 3 Ninjas: High Noon at Mega Mountain. Steiner says the real reason Ric Flair is not here tonight is because he knew he had to face Scott Steiner and he’s running scared. Arn Anderson comes out for a rebuttal. He explains to Bischoff that he may be retired, but he didn’t die. Flair isn’t here tonight for all the wrong reasons. He doesn’t make movies and he’s not a body builder, but he gave people what they paid to see. WRESTLING is still on the marquee, not arms like Big Poppa Pump or backwards ball caps. All Flair wants is your respect and he’s much better than anything the nWo has going on. Bischoff says the last thing people will remember about Arn Anderson is that he was the only person to come out here and defend Ric Flair. Well, now here comes Lex Luger to also defend Ric Flair. While Scott and Luger fight in the aisle, Arn keeps Bischoff distracted as Rick Steiner comes up behind Bischoff. The DFG grabs Bischoff and gives him a suplex on the ramp! Awesome. Hey, there’s Ted DiBiase!

Nash cuts a promo saying that the nWo’s loyalty lies with him, not Hogan. I suppose Konnan being out here is a sign of that. As for the bat match at Spring Stampede, he remarks that Roddy Piper made this match to begin with because Piper is the best “switch hitter in the business”. Daaaang. He also plans to take out the Big Goof once and for all at the PPV. To wrap it up, being this big and this sexy is just TOO SWEET. After Rick Steiner’s entrance, Nash gets on the mic and tells Rick that he’s the one who got his brother to defect to the nWo. To back up his actions, the rest of the nWo come out to surround ringside. Well, everybody but Bischoff. Nash hits his moves in the corner followed by the Bossman straddle. Rick comes back with a Steinerline and an elbow drop. STEINER BULLDOG! Cover, 1-2-NO! Konnan breaks up the pin for the DQ. (3:03) Scott throws his brother Rick into Nash’s Big Boot. From there, we get the JACKKNIFE POWERBOMB. WCW security comes out to arrest Nash, but Scott Norton and Brian Adams beat them up. Ted DiBiase leaves and comes back with the Giant. He nails both Adams and Norton and heads into the ring to meet Nash as we go off the air. 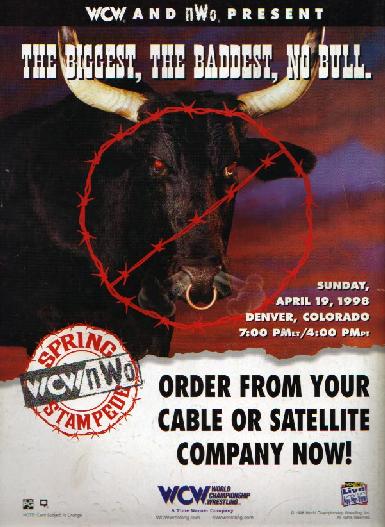