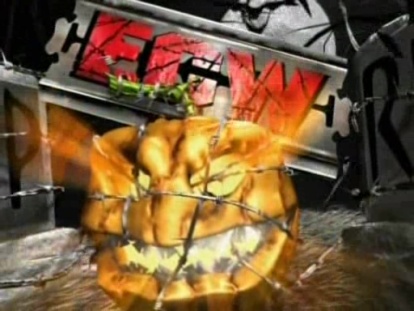 Hey, why not? It’s Halloween. And ECW can be scary.

LAST WEEK: Paul Heyman is making Rob Van Dam jump through all kinds of hoops to get an ECW world title shot against the Big Show. They had a ladder match where the object was to retrieve the title match contract. DID RVD PREVAIL? Yes he in fact did.

Before we properly begin the show, Paul Heyman admits Rob Van Dam will get an ECW world title match against the Big Show. This week on ECW.com, RVD announced that he will face the Big Show at ECW’s next (and first as a third brand under the WWE umbrella) PPV on December 3 called December to Dismember. What Van Dam didn’t know is that Heyman has added unagreed upon match stipulations to this encounter. This match will include four others and will be an EXTREME ELIMINATION CHAMBER.

Your hosts are Joey Styles and Tazz.
END_OF_DOCUMENT_TOKEN_TO_BE_REPLACED