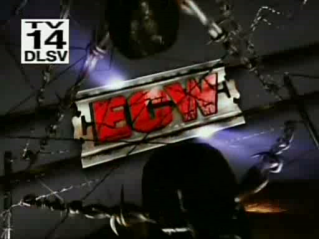 Read along if you have the WWE Network! Search “ECW 65”.

Your hosts are Joey Styles & Tazz.

Big Daddy V provides a brief distraction, allowing Striker to jump Boogey from behind. Boogey makes the big comeback and splashes Striker in the corner. Striker runs away, leading Boogeyman on a chase right into Big Daddy V for the DQ. (2:16) Afterwards, BDV scoops up Boogey and slams him into the post. ½*

In the back, the ECW GM Armando Alejandro Estrada (ha ha!) tells CM Punk he won’t be getting another shot at the ECW title, so he’ll have to make this one count. After Estrada wishes him luck, Punk says “luck is for losers”.

Balls mounts Miz in the corner, but it’s not long before Miz is dominating. Kelly refuses to root against Balls. Balls comes back with jabs, but Miz hits the REALITY CHECK for the win. (1:54) Kelly Kelly stops to check on Balls again, but winds up reluctantly leaving with Miz. ¾*

John Morrison is the Guru of Greatness, the Icon of Infinity, the Sultan of Sexy, the President of Perfection, the Baron of Boisterousness. He then makes fun of CM Punk’s look and straight-edge philosophy.

The heels isolate Dreamer quickly. Nothing of note going on. They’re just kind of running through their usual moves. Richards gets the hot tag and tries to clean house, but it’s Stevie Richards. Elijah cuts him off and finishes with the ELIJAH EXPRESS. (3:30) Yep. ¾*

Not exactly a climactic finish to the chase, is it? They did their best under the circumstances, though. Joey hates to admit that he thinks Morrison’s entrance is pretty cool. Punk gets two off a Springboard Dropkick. A bodyslam and legdrop gets two. Punk fires off a few chops and a snap suplex. Morrison snaps Punk’s throat on the top rope to come back, but Punk pescados out on him as we go to break. When we return, Punk is busy holding a chinlock on Morrison. Morrison powers up and counters the Springboard Clothesline with a powerslam. He punts Punk right in the face for two. He kicks him again and gets two more. Morrison goes up, but gets caught for a superplex. Punk roars back with a leg lariat for two. The corner knee and bulldog gets two. Morrison desperately rams him into the corner and hits a Pele Kick. That sets up Starship Pain for 1-2-NO! Morrison rolls him up and grabs the ropes! That gets 1-2-NO! The ref catches Morrison cheating and stops the count. Punk schoolboys Morrison while he’s arguing with the ref for another nearfall! Morrison tries the Flying Chuck, but Punk ducks and finds the GO2SLEEP! Cover, 1-2-3! (12:32 shown) Ladies and gents, we have a *new* ECW champion. Punk finally gets the big win here. Heck of a good match here. Quite the pop, too. ***¾

Next up, we’ll be heading back over to RAW for the go-home show leading up to Unforgiven.

Until then, so long for now!