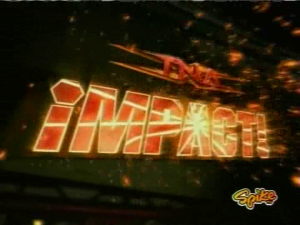 TURNING POINT RECAP VIDEO! Is there not a PPV replay to buy?

The NWA world champ Jeff Jarrett interrupts and the crowd immediately starts chanting “boring” as Jarrett barks at Tenay and West to tell him the details with TNA management and Sting. Tenay has no idea what Jarrett is talking about. If it’s a war they want, it’s a war they will get.

Joe and Jarrett share a look on the entrance ramp. Hey, it’s Jay Lethal’s TNA debut! He gets in some offense early to “shock” the crowd that this nobody could work well against Joe. Once Joe hits that atomic drop and running boot, it’s all downhill from there for Lethal. MUSCLE BUSTER and the COQUINA CLUTCH ends Lethal at 3:33.

Backstage, Shane Douglas is standing by with Konnan and Ron Killings. Nobody foresaw the assault Konnan laid upon Kip James at Turning Point. NOBODY. Shane wants to know why. All he did was redirect the course of the inevitable. It’s been almost a week since Turning Point, but Killings still doesn’t know the TRUTH from Konnan. Killings feels completely lost now and doesn’t feel he can trust any of his old friends. All he can do is walk away from 3Live Kru – literally. Don’t even trip, dog. Konnan will handle this. They are brothers.

Bentley controls to start with a bunch of dropkicks and a missile dropkick for two. Tenay gets word that Jeff Jarrett has wrangled Shane Douglas and they are going to get more information on Sting, I suppose. Shelley fires back with a back suplex and humps Bentley’s head into the mat. Double knees in the corner sets up a tornado DDT for two. Hey look, Shannon Moore is standing on top of the stage holding a sign that says the X-Division needs to get Punk’d. CM Punk’d? Nah. One of the Harris twins who works for TNA security tries to talk him down to no avail. YOU DON’T SPEAK HIS LANGUAGE. Anyways, Shelley is super distracted by this minor inconvenience that allows for a Bentley comeback. Enziguri and the Flatliner gets two. Out of nowhere, the Barry Horowitz rollup gets the win for Shelley. (3:50) Looks like the mid card X-Division is heading in a weird direction. *

Elsewhere, Jeff Jarrett takes Shane Douglas into the America’s Most Wanted locker room. Tonight, they want to find out who is with Planet Jarrett or against them. Monty Brown is first on their minds. Well, Gail Kim returns and tells Jarrett that she has to talk about Jackie Gayda right now. This talk will have to come a little bit later. Too hot for TV, if you will.

After the break, Shane Douglas checks in with Abyss and James Mitchell. Abyss has gashes and scars all over his arm from the barbed wire match with Sabu, which is pretty awesome/gross. Mitchell is trying to get Abyss an NWA world title shot now. First though, they must go through Rhino. Mitchell really does remind me of what I have seen of the Grand Wizard. Of course, he just has a very different look to him. Before they head out, Scott D’Amore comes over and asks Mitchell for a moment of his time to discuss a business opportunity. Stay where you are, Shane. This doesn’t concern you or your microphone.

Short match as Rhino beats up poor Doering for almost two minutes until Rhino levels him with the GORE at 1:48. Gotta get that heat back after losing to Jeff Jarrett and Team Canada last week. After the bell, he discusses what went down at Turning Point. He may have lost to Jarrett, but he made Jarrett bleed and one day looks forward to tearing Coach D’Amore in half with the GORE! GORE! GORE!

Backstage, Jeff Jarrett and Shane Douglas ask the Diamonds in the Rough if they are on his side. They act offended that he would even ask! As far as DITR know, Monty Brown isn’t anywhere around backstage. Jarrett tells Young and Skipper to take care of Team 3D tonight. Diamond assures Jarrett that he’s going to solve Jeff’s problem. As Jeff turns around, Gail Kim is there ready to talk. Ugh, WOMEN. AMIRITE, FELLAS? Jarrett tells her this is going to have to wait and walks away.

After the break, Shane Douglas is with Larry Zbyszko and makes a final resolution for Raven at Final Resolution. If he beats Larry’s opponent, he’ll get another NWA world title shot. But if he loses, Raven is out of TNA forever.

So much for taking care of Jarrett’s problems, Team 3D completely clean house on Young and Skipper to start. Young gets tossed out immediately and Skipper gets beaten up and thrown to the floor by Devon. Commercials! When we come back, Ray gets tripped up by Diamond to turn the tide. Hey look, one of the Hebner twins are out on the stage taking notes. Anyways, Brother Ray hits the Bubba Bomb on Skipper and makes the hot tag to Devon. Shoulder tackles and neckbreakers everywhere. Match breaks down and Skipper gets thrown to the floor. REVERSE 3D on Young, but Simon Diamond has the ref’s attention. Diamond grabs Devon, but Devon moves and Skipper wipes out Diamond. Dudley Device to Skipper! 3D to Young! Devon covers for the win. (7:33 shown) Just an extended squash. DITR rarely ever beat anybody getting a push. *½

In the back, Jeff Jarrett and Gail Kim are with Team Canada. D’Amore confirms that he has spoken with Monty Brown in the building. Monty had little to say except he going to POUNCE on D’Amore if he didn’t leave him alone, period. When Jarrett turns to Gail Kim, she starts acting passive aggressive. Sheesh! Who is writing for these women?

The red carpet from the 2005 Spike TV Video Game Awards gets shown. You have to love how they sneak Jeff Jarrett and AJ Styles in there with people like Samuel L. Jackson, Carmen Electra, Keifer Sutherland, and 50 Cent as if they are rubbing elbows with these people. Apparently, Jeff Jarrett bumped into the Rock backstage. Holy crap Rock was thin in 2005.

Alright, in the ring we have Jeff Jarrett, America’s Most Wanted, Team Canada, Gail Kim, Abyss, and James Mitchell. Quite a cast of characters. Crowd is all over Jarrett chanting “boring”. He’s still crying that TNA management has conspired against him by bringing in Rhino, Team 3D, Christian Cage, and Sting over the past 5-6 months. Well, Sting was the straw that broke the camel’s back. D’Amore and Team Canada show their support for Jarrett. AMW stick by him. Even Abyss and James Mitchell shake his hand. So how about it Monty Brown? Get out here, wild card. Monty comes out and spouts off more Serengeti nonsense. He wants Jarrett to let the Alpha Male loose. Monty says he never liked Jeff, but what he says does hold some merit. He doesn’t play politics or games. However, he believes in kill or be killed and survival of the fittest. If this is a war of attrition, then he’s all in. He shakes Jarrett’s hand and declares that the war begin. As soon as they embrace, the lights go out and Sting’s music plays. On the tron, we see evidence of Sting and the very people Jarrett was speaking of showing up on the rampway. Christian, Rhino, and Team 3D look ready for war as we close out the show.

NEXT WEEK: Nothing announced.