Your hosts are Tony Schiavone, Bobby Heenan, and Lee Marshall. This week is a special Wednesday edition due to the NBA Playoffs.

Our esteemed commentators no more than get the news out that Hollywood Hogan is the new world champ and that Bret Hart is the reason for it when Hollywood Hogan, his Disciple, and Eric Bischoff come out to the ring. HOLLYWOOD RULES YOUR LIFE. Bischoff hands the Disciple the can of spray paint to rechristen the world title belt with “nWo”. He tells us that everyone is afraid of Hollywood Hogan politically, but now things are as they should be and how they always will be. Hogan says he’s not going to talk about how everyone in WCW and otherwise are jealous of him by talking about it. The belt should have never left him (he does have a point there since Nick Patrick never actually fast-counted him) and the whole nWo is back together. He would let us see the celebration, but it’s too sweet for live TV. Bischoff says the nation is calling him Hollywood “6.5 in the last quarter hour” Hogan – referring to the Nitro main event. Also, Hogan wants to tell all of WCW that if they put their hands on Eric Bischoff, they will have to answer to Hogan himself and the entire nWo. As for Randy Savage, Hogan announces that Savage is officially retired due to the injuries sustained on Monday night. So, goodbye Randy. Hogan drops a 4-life statement and we’re outta here.

Throughout the program tonight, they will show clips of what happened between Randy Savage and Hollywood Hogan from Nitro.

Tony announces that Elizabeth suffered some rib injuries back at Spring Stampede when Sting gave her a Stinger Splash by mistake. Disco gets knocked around to start leading to the Hook Kick and the Axe Kick. Booker tosses him to the floor and things just continue to go south for poor Disco as he gets posted. Back inside, Disco feigns a knee injury and drops Booker with a PILEDRIVER. Instead of capitalizing, Disco decides to dance around. He controls a little bit with a chinlock, but Booker fights out and hits the Sidewalk Slam. Disco slows down the comeback with an atomic drop only to charge into a flapjack. SPINAROONIE! Booker lands the Harlem Side Kick and hits the MISSILE DROPKICK for the win. (5:45) They really do a good job putting Booker over – not that his talent doesn’t help that process either. ** 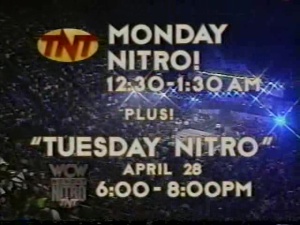 Our esteemed commentators wonder where Meng is at. Plenty noticeable “We Want Flair” chants at the start. Since Spring Stampede, Iaukea is already back in JTTS mode as he loses to a KICK OF FEAR at 2:23. ½*

WCW Saturday Night! Watch it – IF YOU WILL! 6:05PM eastern time on TBS! Only one hour this week due to Braves baseball. Rick Steiner battles Scott Norton and the Barbarian will be in action! Plus, they will re-air the Goldberg/Raven match from Nitro! It’s the MUTHASHIP! Take it to the PAY WINDAH, baby!

There’s still debate between Bagwell and Luger about who the REAL “total package” is. Buff shows off punching down Rick Steiner and nailing him with a dropkick before doing his signature pose. Steiner NO-SELLS a suplex and Steinerlines Buff down. A belly to belly superplex wipes out Bagwell before Rick tags in Luger. Norton misses an avalanche on Luger and gets a burst of offense. Buff breaks up an attempt at the Torture Rack so that Norton can atomic drop and clothesline Luger down. Buff chokes Luger and argues with the ref. Back to Norton, he gives Luger a backbreaker for two. Desperate back suplex by Luger leads to the HOT TAG TO STEINER! He throws the nWo around until the match completely breaks down. Luger and Norton wind up on the floor while Steiner sets up for the Steiner Bulldog on Buff. Meanwhile, Vincent is looking to whack Steiner with a chair when Rick’s brother Scott appears and takes the chair away from him! While they argue, Rick hits the STEINER BULLDOG on Buff. As Rick turns over Buff for the pin, Scott slides in the ring and whacks his own brother with the chair – completely negating everything that was said about Scott not turning on his brother. Buff gets put on top of Rick as Scott exits the ring for the three-count. (5:41) This match is most significant as being the match where Buff Bagwell took the Steiner Bulldog wrong and damaged several of his vertebrae and developed spinal shock that puts him out of action for ten months. *½

Buff receives quite a bit of medical assistance that takes us through several commercial breaks until they are able to get him on the stretcher and be sent to the hospital. He was completely prone for a good ten minutes. Brutal, brutal injury.

They show the second half of the Hogan versus Savage match where Hogan was working the knee – including the FIGURE-FOUR (WOO!) and all the interference that led to the Bret Hart heel turn and the punch on Roddy Piper.

They show the end of the DDP versus Raven match from Spring Stampede where the newest member of the Flock named Horace debuted. They have still shots of Horace disguised the whole match as a WCW crew member! OH THE HORROR.

It’s a rare moment when I recap the earliest match of both wrestlers in WCW in the ring here. Tenay refers to Horace as Horace Boulder from Japan. He got his start over in FMW. Of course he is the nephew to Hulk Hogan. As for Evan Karagias, he’s a North Carolina boy who was trained in the WCW Power Plant and debuted on TV a few months back in January. He resembles Paul London to me here. Anyways, the crowd chants BORING at Horace (since those two words sort of rhyme and it’s how they feel about this match) while he throws Karagias around. Before you know it, DDP runs in and BANGS everybody – including the referee. (1:19) That DDP – what a cool guy. He gets on the mic and tells us he didn’t come to Columbia to bang these guys, but to bang Raven. Well, what do you know? Raven starts down the ramp, stops to look at DDP, and walks back. DDP starts talking about Raven’s family and how he walked out on them, but Raven refuses to be manipulated and heads back to the locker room. N/R

Tony Schiavone (because Gene doesn’t work when it Thunders…HAR HAR) brings out Randy Savage. It doesn’t look like he’s retiring to me. He’s 1,000,000% okay. Savage takes the mic away from Tony and sends him away. Hollywood Hogan is scum. Bret Hart is nuclear scum. He tells Roddy Piper why Bret did what he did. It’s because Bret is a loser and feels the need to suck up to Hogan. He’s sick and tired hearing about Bret talking about being “screwed”, too. Bottom line, Bret Hart is a con man whose totally overpaid, unproven, and the biggest “mark” for his own publicity that ever walked this earth. Bret Hart is now the #1 man on Randy’s intergalactic hit list. OHHHH YEAH.

Obvs, this is Goldberg’s first U.S. title defense. Enos proves to be no challenge as Goldberg hits the Spear and the JACKHAMMER in 2:02.

This is the first appearance of Sting since losing the strap on Sunday. I’m sure WCW was wondering what the heck they were going to do with him now. Steiner pearl harbors Sting to set up a comeback for Sting that takes Steiner to the floor. Sting commits some ringside violence and beats Steiner back into the ring before Steiner low blows him. Steiner runs Sting in the corner and pulls back on his neck while Sting is in the tree of woe. Vincent even gets in on the fun! Back in, the butterfly slam connects, but then Sting blocks a leap from the middle rope with a boot to the jaw. Steiner takes that great corner bump as he eats another boot from Sting. The Stinger Splash sets up the SCORPION DEATHLOCK until Konnan comes out for the DQ. (4:22) Scott Norton is late, but he helps out his nWo boys until Rick Steiner comes out and runs his brother back to the locker room. Meanwhile, the Giant appears and helps clear the ring of the nWo. Sting and Giant embrace, but this friendship won’t last long. Sting gets on the mic and says after beating up the bad guys, he feels like buying a round for everybody. Sting thinks Kevin Nash is a pretty funny guy and should probably be doing standup. He drops a “too sweet” just for fun. Sting references the Four Horsemen parody speech (which was a parody of a speech that was made right here in Columbia) and then challenges the Outsiders to a tag match for the WCW world tag belts at Slamboree. *

WCW/nWo Slamboree LIVE ON PPV premieres May 17 from the Centrum in Worcester, MA.