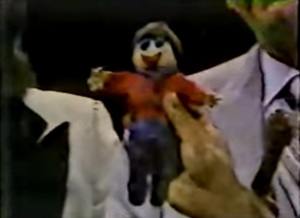 Russell mentions that Billy Robinson just returned from Japan defending the CWA world title. They show the last few minutes of a recent match between Billy Robinson and Paul Ellering from the Mid-South Coliseum. Check out the ticker that talks about a train full of hazardous material was derailed in a small Kentucky town. Good grief. Forget about a wrestling match. That seems way more important right now. Anyways, after doing a lot of leg work, Ellering still gets pinned by Robinson after a great rollup move. Although we won’t see it since the next episode of Memphis Wrestling I have starts in September, Paul Ellering actually splits from Jimmy Hart and turns babyface again on his way out of the territory.

Louisville Gardens promo. Apparently there’s a double elimination tournament over the new CWA world tag titles. Russell talks with the favorites Ken Lucas and Rick Morton. They go all the way to the end, but wind up losing to the Sputnik Monroe’s Manchurians.

In the studio, Russell brings out Paul Ellering and Jimmy Hart. Before he talks, we get some prerecorded comments from the southern heavyweight champ Superstar Bill Dundee. Since Dundee is tired of people asking him if he can beat Paul Ellering twice, he has considered this a challenge and will grant Ellering a title shot. Concerning Ellering’s claims that he’s never been busted open, Dundee compares the situation to Muhammad Ali saying he was the greatest until Ken Norton came along and broke his jaw. Dundee hopes he will be the one to bust up Ellering in the title match. He finishes up the interview saying that Ellering won’t be taking the belt back. Now over to Ellering, he says he’s been in love with himself ever since he first saw his reflection in his baby bath water. If Ellering could find a girl who loves him as much as *he* loves him, he would marry that girl on the spot. Wow. He refers to Russell as “Lance Muscle”. Ellering then claims Dundee went on an African safari after he won the southern heavyweight title and begged the lions to leave him alone. He pulls out a Mr. Bill doll to mock Dundee some more. Hilarious. The crowd is eating it up. He’s either high or we just saw the best Paul Ellering promo on these tapes. Either way, it’s very entertaining. Now let’s get to some RASSLIN.

If you follow these old school recaps I do, you may remember the Manchurians from the Knoxville recaps of Southeastern that I did a few months ago now. Chokes, stomps, chops, and whatnot from the Manchurians. They beat up on Meroni way past the point of him having a chance. Double-team gutbuster finally ends Meroni in 6:03.

Louisville Gardens promo. Lance gives us the hard-sell about the double elimination tournament.

Sonny is patient trying to make Boyles make a mistake. There’s just such a size difference between these two that Boyles realistically has no chance, but Russell does all he can to talk you into believing he does. Russell says Boyles reminds him of Dundee. Sonny King is a dick though. As soon as Boyles gets a nearfall, he jumps up and slaps Boyles across the face before putting him in an inside cradle for the academic three-count at 5:50.

As Lance mentioned the time we visited Memphis, David Oswald is becoming a rule breaker and Russell is disappointed. Morton has grown out his hair a little bit more than I’m used to. He looks more like Steve Regal or Chick Donovan. The tag champs are never in any trouble here – not even Morton. While they work on Oswald’s leg, the tape cuts out and goes to the local weather. When it returns to wrestling, the match is over after 6:22. Lucas put Oswald to sleep with his dreaded SLEEPERHOLD.

Louisville Gardens promo. We hear from Sputnik Monroe who will be representing his Manchurians in the double-elimination tag tournament. Always cool to see a Memphis legend like this.

That’s the show for another week. Paul Ellering’s crazy promo is a must-see. NO DOUBT. Until next time though, so long for now.