Your hosts are Tony Schiavone, Bobby Heenan, and Lee Marshall. Is that the Chucky laugh I hear again? NO ONE KNOWS WHERE THE LAUGH IS COMING FROM. Tony needs to know! END_OF_DOCUMENT_TOKEN_TO_BE_REPLACED

HOUR NUMBER ONE! Your hosts are Tony Schiavone, Mike Tenay, and Larry Zbyszko. Tony announces Scott Hall will be in the main event teaming up with the Giant against Kevin Nash and Lex Luger. Will the WCW world tag titles finally get defended tonight? Just maybe? END_OF_DOCUMENT_TOKEN_TO_BE_REPLACED

The show opens with a (This Is) Sting montage. Unfortunately, the sound cuts out about halfway through and just after he goes from the bleached blonde Sting to the Crow Sting, we switch over to the Nitro theme instead. Good grief that looked bad. 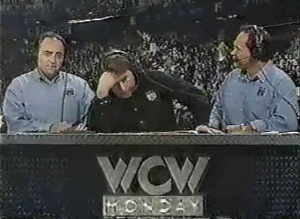 With no NBA playoffs tonight, WCW is back at it with a three-hour show. Not only that, but this is the go-home Nitro to set up Slamboree. Let’s see what WCW has in store.

It’s the second half of the NITRO DOUBLE HEADER~! This aired from 6PM-8PM EST. So no Babylon 5 tonight, nerds.