It’s the second half of the NITRO DOUBLE HEADER~! This aired from 6PM-8PM EST. So no Babylon 5 tonight, nerds.

HOUR NUMBER ONE! Your hosts are Tony Schiavone, Mike Tenay, and Larry Zbyszko.

Benoit is all aggression to start. He’s stomping and chopping Disco around. When he starts dishing out suplexes, Disco has to make him stop and stuns him with an atomic drop. Disco puts the boots to him and hits a swinging neckbreaker. Benoit fights out of a chinlock, but Disco debuts a Chicken Wing Shoulder Jawbreaker. It’s an interesting take on the Chartbuster which was STOLEN from him. Benoit comes out of nowhere with a German suplex and delivers the SWANDIVE HEADBUTT and applies the CRIPPLER CROSSFACE for the tapout at 5:30. *½

They air a piece on the Chris Jericho and Dean Malenko feud.

Jericho comes out to the ring mimicking Dean Malenko. It’s a pretty spot-on hilarious impression for sure and he tries not to laugh at himself, which is great. Jericho gets on the mic and mocks his comments from UnCeNSoReD about going home. HAH. Like they do every week, the crowd lets Jericho know they think he sucks. Jericho wants to keep this headlocks and shoulderblocks, but Psychosis is busting out spinning heel kicks and clotheslines. Psychosis blocks and reverses a Liontamer for a nearfall. Jericho makes him pay with some kicks and a suplex to set up the C’MON BABY. He works a backbreaker from there. Psychosis misses a dropkick, but then avoids a charge that sends Jericho to the floor for a plancha! Back in, they mistime a spot where Psychosis dropkicks away the Lionsault. Nevertheless, Jericho is stuck in the ropes and gets nailed by the GUILLOTINE LEGDROP. Cover, 1-2-NO! Good nearfall there. Another botch this time on the top rope lands Psychosis in the LIONTAMER (which was a mess as well) for the tapout. (5:10) Good match in theory more so than in practice. **

I feel like they are just setting up the return of Meng at some point. Barb and Rocco clubber on each other. When it looks like they are going to the finish with Jimmy Hart grabbing Rocco’s foot, the fight continues as Hugh Morrus comes down and nails Rocco while Barbarian has the ref’s attention. Once Morrus is on the floor, Johnny Grunge appears and whacks him with a trash can. Oh boy. Instead of DQ’ing somebody, ref Mickey Jay decides to make this into a tag match because referees apparently have that kind of power.

It’s a big street fight mess. Public Enemy try and do their big table spot to Jimmy Hart, but he gets pulled off at the last second as Morrus and Rocco go through the table instead. Since we’re left with only Barb and Grunge, Barb gives the trash can the KICK OF FEAR in Grunge’s face for the win. (4:43 total) Well, that was bizarre. ¾*

Tony announces that Bret Hart will indeed face Randy Savage at Slamboree on May 17.

Special video look at Juventud Guerrera. It’s all highlights from his matches with Jericho.

Tony remarks how it’s such a great message for young athletes to “never give up”. I doubt it’ll ever get over, Schiavone. Guerrera snaps off a nice tilt-a-whirl headscissors to get things going. Over in the corner, Kidman stops a ten-count corner punch with a low blow and gives Juvi a SUPER BK BOMB! That gets two. After a series of reversals, Guerrera ends up on the apron and drills Kidman with a springboard crossbody block for two. Kidman tries to score with a big superplex, but Juventud counters and drops him on the top rope for a hurracanrana to earn another nearfall. Over in the corner, Guerrera lands the JUVI DRIVER and finishes him off with the 450 SPLASH. (3:53) The Flock come to get revenge on Juventud. He does fine against the lesser-thans of the Flock, but can’t stop Horace and Reese. Super fun, high speed spot-fest. This really is Juventud’s best year. ***

Gene Okerlund brings down Alex Wright. He’s been missing since November. Wright says he was vacationing in his homeland of Germany. He tells us nothing else and insults Norfolk. Since he won’t stop dancing, WCW security escorts him to the locker room.

Feeling out process to start. Once they start on the wristlocks, you know it’s just a matter of time until Eddie gets a Hook Kick. Guerrero goes to the knee to get him off base and hits a suplex for two. Eddie punishes Booker with chinlocks, but Booker comes back with the jumping forearm smash. Guerrero catches Booker with a headscissors, but only gets two with his feet on the ropes. Eddie yells at Chavo for reason. While Chavo though about knocking his uncle’s feet off the ropes, he doesn’t touch him. Meanwhile, Booker is doing the SPINAROONIE and nails Eddie when he turns around with the Harlem Side Kick. The MISSILE DROPKICK takes care of Eddie for the win. (4:30) Wow, that’s it? Alright. *½

They replay a bit of Bret Hart’s interview before the real interview from last night.

Saturn goes right after Jannetty – abusing him from corner to corner. Arm trap suplex connects. Jannetty catches Saturn with a nice superkick and the Flying Fist Drop, but Saturn doesn’t care and gives Jannetty his new finisher: THE DEATH VALLEY DRIVER. That gets the three-count with no problem at 2:15. WHAT ARE YOU LOOKING AT?

Gene Okerlund brings out Diamond Dallas Page for an interview. He got real personal with Raven on Thunder and wants to get even more personal here tonight by banging him. At least buy him dinner first. Sheesh! Instead, Sick Boy and Kidman come out and point us to the video wall to hear another one of Raven’s promos telling us about DDP’s past. It’s all very interesting. Not. It’s over, DDP. It’s over. He’s already beaten you. Back in the arena, DDP bangs Sick Boy causing Kidman to run off. After DDP runs out through the crowd, Kidman returns to the ring to mock DDP. Next thing we know, a “fan” who looks an awful lot like Kanyon jumps Kidman from behind causing the super scary WCW security to pounce on him like it’s a shoot.

This doesn’t last long. The Spear and a *great looking* JACKHAMMER ends him in :48.

NITRO GIRLS~! This is the moment Tony decides to tell us about Buff Bagwell’s surgery. He is in stable condition. The great news is that his prognosis is good, but he will be out for a while.

So it’s the WCW A-Team versus the nWo B-Team. And wait a minute, isn’t Konnan supposed to be split from Hogan’s nWo? Nobody is going to talk about this? Okay then. Sting and Adams start us off here. Adams hits an atomic drop and a backbreaker pretty quick. Sting fires back with the face slam and tries the Scorpion Deathlock, but Adams is in the ropes. Giant and Konnan are next. Konnan gets pie-faced and sent to the floor. Back in, he runs at Giant and gets slammed. He goes right into the arms of the Giant for a bearhug. Just real poor strategy. Now we get Luger and Steiner. We get a big standoff. Steiner’s straps come down and the crowd is totally behind Lex. It must be 1988 again in Norfolk. They play a game of shoulderblocks which Luger wins. Konnan distracts Lex though and allows Steiner to hit the Butterfly Suplex. He’s very happy about getting that move off. Steiner poses and taunts Sting and the Giant. When Sting starts to come through the ropes, Steiner backs off. Steiner hammers on Luger in the corner and tags Konnan, but Luger clotheslines them both down. Both guys are looking for a tag for some reason, but Adams drops off the apron and walks out on them. As they stand in the corner in disbelief, Sting flies in with a Stinger Splash. Both Steiner and Konnan decide to head for the exit sign while Vincent gets left behind for a CHOKESLAM. (6:35) Well, this was a house show match if I ever saw one. **

Gene Okerlund brings out Bret Hart for the real important interview. He won’t say anything until Hollywood Hogan is here. Hogan, his Disciple, and Eric Bischoff come down. Bret tells Hogan that he’s always respected him since he’s made more money than any wrestler ever and recognized around the globe more than any other wrestler. Hogan thanks Bret for telling it like it is. When Bret starts to tell Hogan the biggest reason he wanted Hogan to be the champion, Randy Savage appears and punches him in the face. To end the show, Hogan and Disciple hold up Savage so that Bret (who takes off his jacket to reveal a Hogan t-shirt) can beat on him.

No Thunder this week.

Until next time then, so long for now. 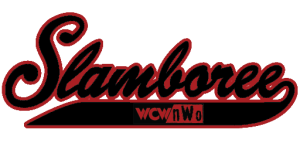