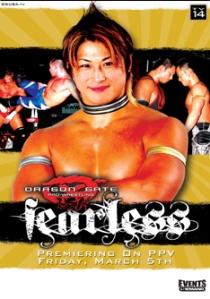 In order to crown the first-ever Open the Freedom Gate champion, there will be four qualifying matches – one will be a six-way match, one will be a fatal four way match, and also two singles matches. The winners of these four matches will be included in a four-way elimination match in the main event of this show and the last man standing will be crowned the Open the Freedom Gate champion. USA! USA! USA!

Your hosts are Lenny Leonard and Phil Colvin. END_OF_DOCUMENT_TOKEN_TO_BE_REPLACED

So I may be about five months behind on this one, but let’s see what all the hubbub is about since it won various ‘Show of the Year’ awards.

ECW alumni Dawn Marie welcomes everybody to the program. She will be *YOUR* special guest ring announcer for the whole evening. Just so you know, she looks nothing like this (NSFW) anymore. I enjoyed looking up that little picture.

Footnotes:
[1]: This was an 8-team tournament final to crown the first-ever ROH tag team champions.
[2]: As a member of Christopher Daniel’s stable called the Prophecy, Xavier was allowed to defend the titles in Donovan Morgan’s place. Styles and Red were forced to vacate the belts due to an injury Red suffered.
[3]: The vacant titles were decided in a gauntlet match which also featured the teams of the Briscoe Brothers, Hydro & Deranged, and the Ring Crew Express. The Backseat Boyz were the team to survive by defeated Dixie and Izzy and were therefore awarded the tag belts.
[4]: In March 2005, Dan Maff quit the wrestling business and the titles were once again made vacant.
[5]: This match was to determine who would take the vacant ROH world tag team titles.
[6]: Rocky Romero & Davey Richards defeated Jimmy Jacobs & Tyler Black, Bryan Danielson & Austin Aries, and Brent Albright & BJ Whitmer in an Ultimate Endurance match to win the titles.
[7]: In May 2008, a Mark Briscoe injury caused the Briscoes to vacate the tag belts.
[8]: This was an 8-team tournament final to crown new ROH world tag team champions.